This question appeared in another form in the Structural Engineer Magazine September Issue. 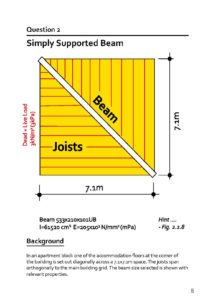 6 readers kindly pointed out that there is a closer answer to the triangular loading udl substitution. The peak may be more accurately calculated, which reduces the answer by 40%….see text below for response to readers…..

Further to the ‘and finally’ question in the September issue, comments from readers (David Carr, Stuart Marchand, Peter Rees, John Illingworth, Alec Swanborough and Tom Bedford) correctly pointed out that the printed answer was some 40% over conservative. When the question was set, it was checked on a simple computer model, but by using the peak load (21kN/m).

Also,Tom Bedford noted that, for this asymmetric load shape, taking an equivalent UDL of 50% of the peak (i.e. 50% of 15kN/m = 7.5kN/m) yields a very close approximation to the triangular loading. I generally use 2/3 of the peak as this applies to all triangular load shapes (if the peak is in the centre, for instance, taking 50% of the load is ‘under-conservative’) and it keeps the calculation on the safe side, which is good enough for an initial ‘rough’ check.

Had the total load on the beam, been checked, it would have clearly shown that this was a gross oversimplification. I apologise for any confusion which may have arisen.