Support Cables in the

A stunning stadium roof built for the 2014 football world cup, the  Arena Fonte Nova was designed by RFR Engineers using non linear analysis. RFR was founded by Peter Rice of Ove Arup in 1982 in Paris. In the November 2014 edition of the Structural Engineer magazine the design was featured for this oval shaped stadium comprising a PTFE Fabric roof supported of a series of radial beams. The roof floats over the stands by means of a ring beam; a series of vertical posts tied by top and bottom cables.

The interesting question is can a sensible method of first appraisal be used to check the level of force in the ring beam top and bottom cables which is hung off the cable braced beams?

As an exercise in understanding the roof action the roof was firstly simplified by squeezing in the ends of the oval shape into a series of concentric circles approximating to the estimated overall stadium dimensions. This was split into 36 (10degree) segments with equal loading. The main cable support posts were estimated to be 22m in depth (by scaling the photographs). An anatomy of the main structure is shown below: 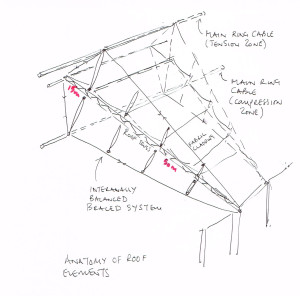 The plan dimensions are shown below in metres: 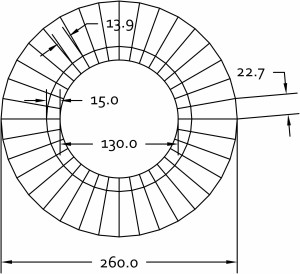 By assuming that the only support to the structure is via the cables (noted as main ring cables), holding up the main beams, this was firstly checked in 2 dimensions by separating out one of the 10 degree segments. A hand calculation with assumed light loading was undertaken – derivation of cable forces from figure 2.9.29 in the book. 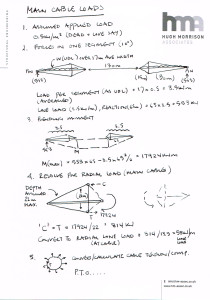 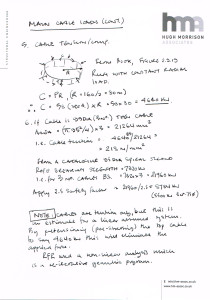 In summary the cable loading is shown as balanced, but in reality, in a non linear system the lower cables will resist the downward load, unless the top ring is prestressed to compensate and assist with reduction in deflection. As noted in the article the top ring acts to counteract any uplift from wind – a neat balanced system.

A model was put together in GSA, the same software used by RFR, but only as a linear model: 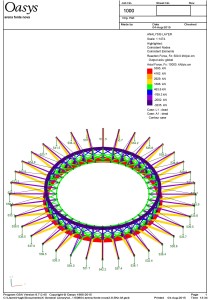 It shows a top cable in compression, but in reality with a rebalancing of downward load the top cable would reduce in value with the bottom cable assuming more tension.

This is all very crude, but gives an understanding of how the model works with anticipated forces internally. The GSA model will help to assess how out of balance loads with act on the system.