Pin Connections (or Lugs) – A Review 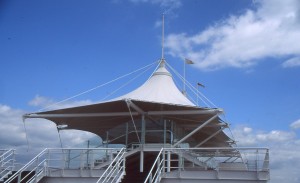 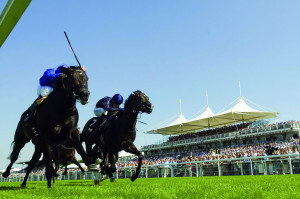 In the late 1980’s the writer left the aerospace industry as a stress engineer and began a career in structural engineering. It was a cultural change in approach. Aerospace structures are generally designed using data sheets; with prototype testing verifying structures prior to flight models. It was not codified; first principles and use of stress analysis techniques as opposed to codes or standards.

With an interesting assignment at Arup Associates the first design task was to work in conjunction with the lightweight structures group to design a PVC tension roof, to include analysis of all the structural elements. As part of this the external tension ties, comprising 50mm diameter bars (see above images), with pin connections to the main structure, were sized. Fresh out of the aerospace industry I applied methods based around lug design. Unfortunately, it was pointed out by a supervising engineer, that the design was not in accordance with the method in the steel design standard (BS5950), which meant adjusting the edge of the lug so that it extended further from the hole. Lesson learned – follow the codes at all times!

However, some 25 years later, I am still not entirely satisfied that the code method is an approach suited to engineering design enquiry. Why is this? Because, design approaches which are based on failure modes, or at least follow the route of considering force (or moment) load paths, will give the engineer results which will enable to them to make informed decisions. An example of this might be timber frame racking (or shear wall) design where codified methods accept or decline panel arrangements on the basis of ratio of openings (by height) rather than on acceptable shear flows in the section; there are perhaps ways of enhancing openings with framing in order to render wider panels, or multiple stories which will clearly allow greater shear strength on account of no openings over the lower floor. All structures are unique; engineers need to be able to consider individual designs on their merits with an understanding of the load paths. 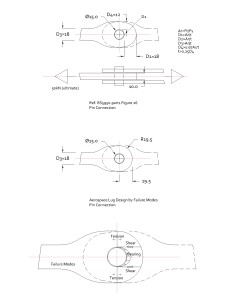 The diagrams above show the BS5950 method (top) which assigns a pin connection on the basis of ratios and aerospace method (bottom) which checks three failure modes: tension across the narrowest sections, shear out adjacent to the pin and bearing at the pin face.

Having said this the shear out method can be more sophisticated in terms of the allowable shear area, but this exercise at least illustrates a point. Also in some cases fatigue needs consideration which is left out of this discussion since many building structures operate at relatively low stress cyclical level in service. This might not be the case with say, bridge cables or pylons. 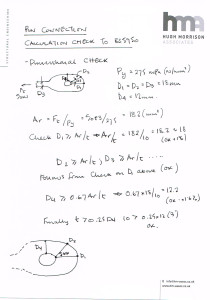 Above the geometry is checked for dimensions D1-D4 and compared with a ratio of the bar area/py. 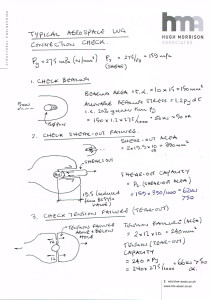 In this method three failure modes are considered and checked against the loading.

The lug designed by the BS5950 method has a pin which is set back further from the edge (18mm) compared with the aerospace lug with an equivalent dimension of 12mm. In the second case, the material around the pin is a constant concentric radius of of 19.5mm around the pin.

While begging caution of the reader not to use the aerospace method, since this may be in contravention to the codes (Eurocodes now supersede British Standards in the UK, but it is believed the method of design is similar in the UK), it is argued, all the same, that the aerospace method is superior in that an engineer, in following the calculations, will have an appreciation of the way that a lug might fail. Whereas, use of the code method, does not achieve this end.

It is also argued that geometrical methods are more error prone and do not give indicative results which how the error might cause failure (bearing, shear or tension). The ratio calculations do not relate to any failure modes (at least they are not stated, even though there is clearly a link to failure criteria when compiling codes).

Another example illustrates the issue. See below. The pin has been amended by forming a larger pin hole and seam welding on an annulus (or bush) in the same material but 20mm thick (twice as thick as the lug). This serves to increase the effective areas and to strengthen the lug. With the standard method of calculation to BS5950 there is no way of assessing the strengthening effect, but with the ‘design by failure modes’ method it may be assessed by altering the areas (shear, bearing and tension tear out). 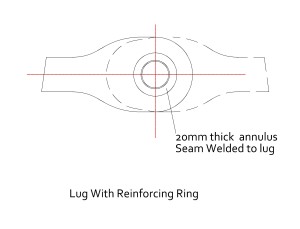 This is a plea for more transparent design guides which allow an engineer to make ‘engineering judgement’ more effectively.