Further to the recent post a new article appeared outlining the dynamic behaviour of the stair by Expedition Engineers. In the June 2015 edition of the Structural Engineer magazine the stair design was featured on the cover and the design described in the feature article on ‘Engineering HQ: the new home of structural engineering’.  In the July issue a discussion on the tested dynamic behaviour of the stair followed.

Back checking the model in the previous post, a calculated fundamental natural frequency of 8Hz was found, based on the methods outlined in the paper by Bishop, Wilford and Pumphrey (reference 7 in the article).

This was interesting, wherein lay the discrepancy whereby the Expedition Engineers calculated natural frequency was quoted as 14Hz? This was close to the tested fundamental frequency of 15.6Hz without the glass balustrade.

Back-tracking and reviewing the model the supports for the treads were altered to a fully fixed (encastre) condition – whereas in the Struartapp  analysis they were given vertical restraints and partial horizontal restraints. This new run gave a natural frequency of 14.85Hz (see output below). 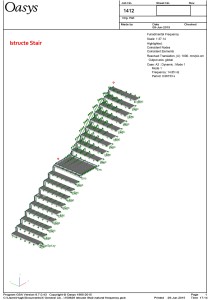 Furthermore, the reactions at the supports changed from the primarily vertical reactions in the Struartapp post into horizontal; as posited by Expedition Engineers… 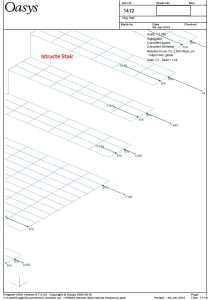 The proof, it appears, is in the tested behaviour of the stair. Which only goes to show, perhaps what a useful tool the mobile phone dynamics app can be. Not only does it appear to demonstrate the fundamental dynamic behaviour but also serves as a demonstration that the design engineers where on the right track.

In defence of the simplified solution in the last post, at least this appears to have been a conservative approach which would have given a safe design! Q.E.D.