Appraisal of the New IStructE Stair

Built in 2014 when the Institution of Structural Engineers moved to a new headquarters in Bastwick Street, Expedition Engineers undertook the design of a staircase in the main atrium, as part of their commission for the building. Hugh Broughton Architects were the architects. It was based on traditional cantilever stair construction, but in a modern context with elegant precast treads, steel stingers and landings, which was shaped with the flow of the treads and risers, and a glass balustrade.
In the June 2015 edition of the Structural Engineer magazine the stair design was featured on the cover and the design described in the feature article on ‘Engineering HQ: the new home of structural engineering’. It is an interesting variation on a theme from traditional stone cantilevers. An alternative load path for the stair support is offered for discussion. 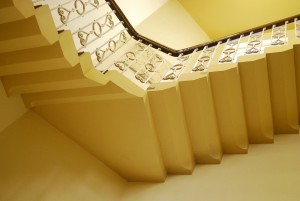 A traditional stone cantilever, like the one shown in the image (courtesy of Russ Hamer in Wikimedia Commons) shown of the Old Courthouse stair in Derby, comprises stone treads, which rest consecutively on each over from top to bottom of a flight. In simple terms, half the weight of each tread is carried directly in bearing into the supporting side wall, and half onto the tread below with the offset action creating a torsion in the tread which is resisted in the tall. The outer edge loading down the stair increases incrementally so that the bottommost treads gather the accumulated torsion from the treads above.

A simplistic force diagram is shown to the right. 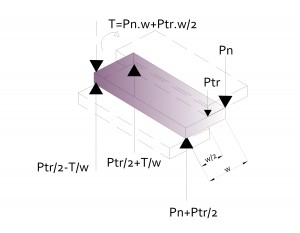 The Institution of Structural Engineers HQ stair ) is a variation in that the outer edges of the treads are part supported by a combination of stringer and glass balustrade).
(Click here to search for images of the stair) 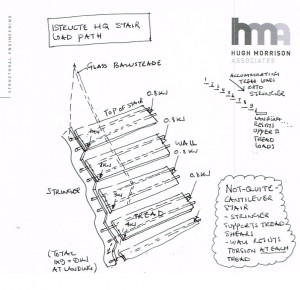 Ignoring the balustrade, a load path was investigated and modeled as a plate element model; with assumed 1.2m width of stair and 50mm deep precast concrete treads) and a continuous 75x30mm steel stringer.

The image to the right shows applied dead and live loads split, such that half the load acts on the outer stringer and half at the wall support. In short, the outer loads are supported by the stringer in compression (accumulating and being supported at mid landing). 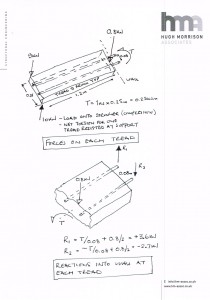 er has its bending moment virtually eliminated by the resistance in torsion through the tread tie rods which are fixed into the wall. Herein lies the interesting point, in that, unlike traditional cantilever stairs, where the torsion accumulates, the presence of the stringer causes the torsion in each individual tread to be resisted locally into the wall. A neat trick, if you like, to slim down the treads. The diagrams below are the hand drawn load path and output from the model local to the tread above the half landing. 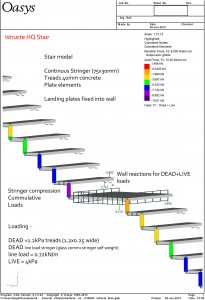 As an aside, with the glass balustrade built into the model it contributes significantly to the overall structural stiffness. In terms of dynamic characteristics, this serves to raise its natural frequency and to provide damping. Its weight was added to the model and hand checks, but ignored in the model.

A different load path assessment from the article perhaps, but there are different ways to look at structures. It is important to be able to break down the analysis and to question models with hand diagrams in order to understand how each component contributes to the design, which will in turn govern each detail.

Well done to the architect and engineers on creating such an elegant solution.