Johnson Wax Building (1938) – Building Ahead of Its Time

This post reviews briefly testing to destruction of a tapering reinforced concrete column, conceived in ‘organic style’ like a flower stem with calyx. 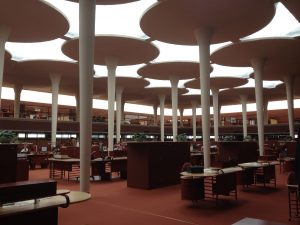 The image to the left shows the vast open plan offices for the Johnson Wax company headquarters in Racine Wisconsin which was completed in 1938.

The dimensions of the columns were as follows: height 21ft (6.5m), base 9in (225mm) diameter, head 21in (533mm) diameter – hollow, opening out to a concrete dish at the top (calyx) 18.5ft diameter (5.7m). the columns supported glass skylights on a grid approximating to 7m (actual dimension not known).

The two engineers who made calculations for the columns were Mendel Glickman and Wesley Peters, the son in law of Frank Lloyd Wright.

Their design was not believed to be sufficient according to the state engineers, who stated that the base of the columns should be at least 30in (762mm).

It would not take a lot of imagination, looking at the columns in the image to the left, to see the effect of tripling the column diameter – they would look stupendously large. Intuitively, looking at the proportions of the columns and the fact that they are not carrying a large load – lightweight roofing and their own self weight – the stems look proportionally correct.

To prove to the authorities that the columns were strong enough a column was tested to twice its design load – 24tons (24,000 lbs; 11,000kg;110kN). Frank Lloyd Wright stood next to the column at the design weight of 12 tonnes and tapped the shaft with his walking stick.

The column was loaded further 60 tonnes (5 times design load), when cracks appeared, but it still withstood the loading, only collapsing after a crane pulled away one of the timber props.

Might the design be judged conservative by modern standards?

Can the maximum 60 tonne load be justified by our old friend, the Euler buckling equation? 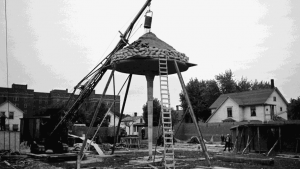 The testing was carried out using sand bags and sand to load up the columns.

The image to the left shows the test column. It was supported by leaning shores which were braced in plane.

By appearance the shores provided partial restraint to the top of the column, but for the purpose of this blog it will be assumed that they are well held in position.

There is bound to be some eccentricity of loading. This is assumed to be 150mm or circa 30% of the top diameter.

If the initial 2xdesign load is considered to be the ultimate load to limit state design, then a simple chart for circular columns can be used. In this example the UK design standard chart BS8110 is shown below.

A calculation was carried out based on a design ultimate load of 110kN, with moment of 16.5kNm from the 150mm eccentricity and an average assumed column diameter of 250mm….

Using the parameters on the chart below, it is clear that the column is not designed anywhere near its practical limits, with only minimum reinforcement needed to comply with a modern code. The main vertical reinforcement may be shown to be approximately 0.4% of the column area (assuming an average diameter of 250mm or 1ft). This is a minimum amount generally used in contemporary design.

Note that the column is sensitive to the eccentric bending moment in this example. 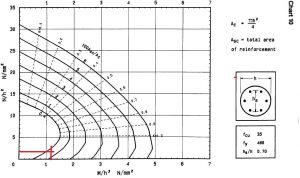 Is the column slender?

BS8110 gives a limiting ratio of height between restraints to minimum width approaching 60.

The column is not particularly slender, although visually it appears so.

Failure of the test column is envisaged as a buckling of the section.

To test this Euler critical load is readily found as the column is slender……with reference to the book page 78, aside….

Answer – critical buckling load is 101 tons which is 40% greater than the final test load of 60 tonnes.

The column was designed well within its capabilities, assuming a reasonably strong concrete, well compacted with nominal reinforcement mesh. When the props were removed the loose material (sand bags and sand) might have very quickly increased any eccentric loading into a progressive collapse. The column was vulnerable to an increase in moment (see above) and the second order effect of shifting load and lack of restraint.

A very informative youtube video lasting about 30 minutes gives a fascinating history to the building.