Mortarless Brick – Is it Feasible?

Can This Invention be Put to Use? 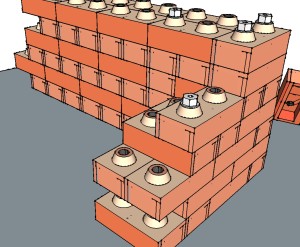 Taking the idea further a bolted brick construction was invented, eccentric perhaps, but not unlike numerous other inventions: interlocking blocks, bolted timber assemblies and so on. This invention involves two components – bricks (material not specific – moulded form – plastic, GRP, concrete most likely) and bolts with ‘female’ threaded sockets in their heads.

Bricks fit onto bricks below, kept in place with prismatic hollow protuberances through which bolts may be inserted. The size of brick envisaged for building is similar to stock bricks used today (75mm deep, 125mm wide and 250mm long). Modular bolt lengths based on a mutliple of courses; between 3 and 8 courses as a practical length.

The number of protruding heads on a prototype was eight per bolt but it was later thought to be too many and was cut down in the latest components (see image above).

Attempts were made to market the idea, but short of questionable investors online, keen for money from the inventor to set things up and dubious track records, the idea has to date been taken no further. It does have real potential in the construction industry, particularly as a strong form of construction with tight tolerances and hence standardisation, but would need some investment in material selection research and cost models. It would take limited skill for the application and could be dismantled and rebuilt as a form of wall. Sustainable no less! 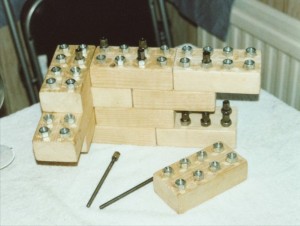 To test the idea a garden workshop prototype was made with timber blocks and adhesively bonded nuts as the bricks and specially machined rods with tap welded nuts to make the bolts. This demonstrated that:

Not a great deal of research was made into suitable (mouldable) material for the bricks. But two appeared to stand out:

This has high strength and good impact resistance with low ‘creep’ and may be moulded into small components with a fine aggregate. It may also be coloured to a variable tone/colour. Very fine fibres, smaller than commercial types for slabs are envisaged.

A versatile DIY (Do it Yourself) application which may be tailor made to limit materials with internal stiffening. May be made in virtually any colour. Use for stands, internal shelves and so on.

For construction application – strong and cheap to obtain.

For DIY applications where high torque is not needed for tightening.

Briefly the stages of construction for the ‘construction application’ are outlined below: 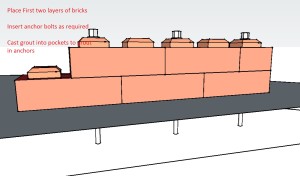 Stage 2 – Lay next courses (3 in diagram). Fit and screw in bolts where anchors are fitted below 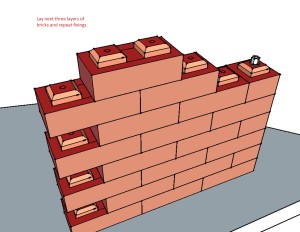 A more thorough explanation may be found in the patent link patent GB2394730 .

Aspects to Consider in Construction

There are a number of pertinent matters to consider if designing a wall:

Is it Stronger than Traditional Masonry?

This brings us back to the approximation topic. Three calculations were made assuming unreinforced concrete.

The limiting factor in the calculations appears to be the punching shear in the brick from bolt ‘pull through’ but the shear stress allowed is believed to be on the conservative side; tests would be needed to prove the material.

The brick checks were for Compression, Bending and Shear… 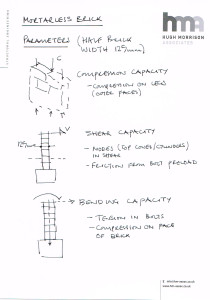 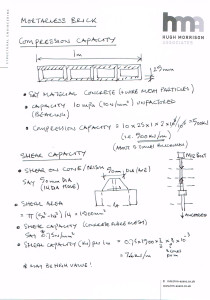 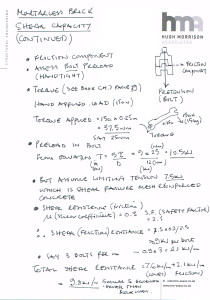 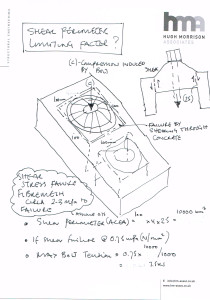 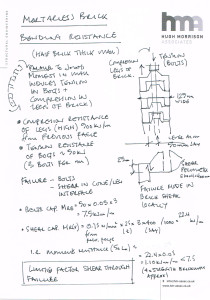 Racking (in plane shear walls) – not calculated but envisaged to be somewhat better than traditional masonry. Good for earthquake resistance?

Looks good? Will it Ever be a Good Proposition?

Any comments or suggestions welcome.