Engineering Wonder of the Early Aviation Age Circa 1925 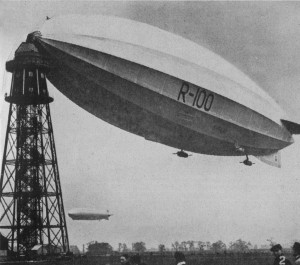 The R100 design was a remarkable tale of engineering, circa 1925. First it should be pointed out that two airships were designed and built in competition: the R101 by a government backed team (chief engineer: Lieutenant-Colonel Vincent Crane Richmond) and the R100 by a private venture (chief engineer: Barnes Wallis) – backed by a subsidiary of Vickers. The intention of the Air Ministry was to adopt the winning airship design for mail and passenger transport within the British Empire (in particular Canada, Australia and India). Notably the lead stress engineer on the Barnes Wallis team was Neville Shute Norway who subsequently published novels and the autobiography – Slide Rule – in which he described his experiences in this project. 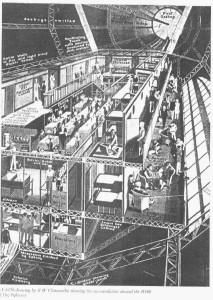 The R101 was constructed in Cardington and the R100 in Howden Yorkshire in an adapted air station. The R100 was flown to Cardington on its maiden test voyage and modifications were made in in Cardington. The R100 was then flown to Canada, with Neville Shute Norway on board; docking in Montreal and then returning to Cardington. Under pressure from the air ministry after the successful flight of the R100, the more troubled prototype of the R101 was flown, despite reservations from some parties, and crashed in France on 4th October 1930 with many killed, including the Air Minister, Lord Thompson of Cardington. 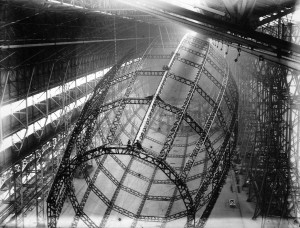 The  book Slide Rule by Neville Shute is well recommended, written by an engineer, with first hand experience of this project, following also his subsequent career in aircraft design and manufacture prior to World War II. Wikipedia is a good source of background history to the R100 and R101.

A geodesic framed structure with a series of circular (16 sided polygon) transverse frames and longitudonal frames at each of the corner points of the polygon.

The total length was 700ft (212m) and maximum diameter 130ft(40m). The transverse girders were constructed from a form of aluminium (Duralium), which were restrained by 16 radial cables (diameter not known – assumed 1 inch or 25mm diameter) per frame. The transverse frames were spaced at circa 45ft (13.5m). The longitudonal frames were similar in section as triangular trusses.

The airship gas bags were Hydrogen filled. It was powered by three mounted gondolas and steered by means of a rudder at the rear. The gross weight was in the order of 156 tons.

The air frame was covered with a fabric skin.

A Snapshot of the 3 Month Analysis

A transverse frame slice was modeled on GSA and backed up with a preliminary hand calculated check. The writer has no idea if the results or air pressures are any where near the actual answers that Neville Shute and his team obtained, but it at least shows how powerful a tool we have with computers to short cut the tedious process.

The most difficult task was to find 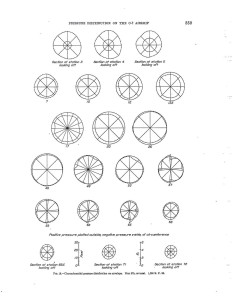 appropriate pressures for design. Atmospheric pressure varies with height from 100kPa at ground level to around 72kPa at 300ft, reducing with greater altitude. The actual net pressures on the air frame fabric are much lower than this as the pressure inside and out tends to equalise.

But from a 1920s paper from Cranbrook a maximum measured pressure on the main body of an airship was measured at circa 3 pounds/sqft (circa 0.15kPa). Not knowing what pressures occur with gust and maneuvering net pressures were selected similar to buildings – 1kPa at or near ground level and a conservative 2kPa at higher altitudes. Pressure plots to the right show almost uniform pressures on the main body of the tested airship (reversible it appears).

An out of balance pressure on a quarter segment was given as 0.5kPa. 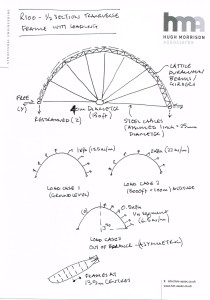 The diagram to the right shows the overall parameters of a centre segment. Like Neville Shute the transverse frame was cut in half for simplicity.

On the GSA model the lattice girder was likened to a 635mm depth (as per the girder) but as a thin walled tube in aluminium. 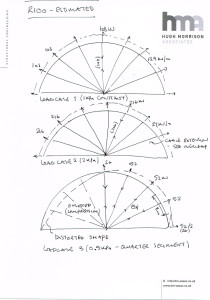 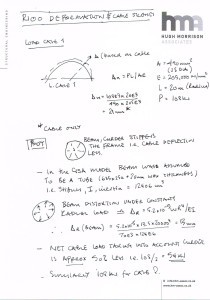 Taking cases 1 and 2 the statically indeterminate problem was made difficult by the interaction of the girder stiffness with the cable axial stiffness.

As a rough estimate the expected deformation of each under full load was calculated and the net effect was that the cable load was halved from the previous sheet. 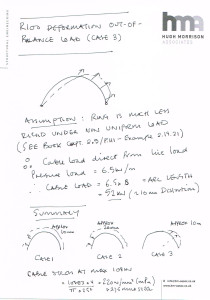 In summary the distortions are shown as an estimate …….

And finally some GSA output shown side by side.

The first is for the Load Case 1 – even distribution of pressure at ground level.

Load Case 2 shows the out of balance quarter segment output. Cables going into compression were removed in a similar way to the method by Neville Shute. 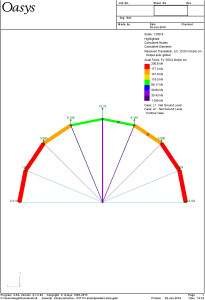 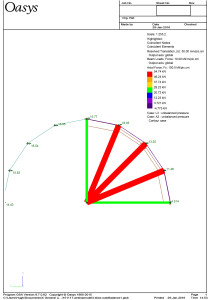 Imagine having to spend three months doing this by hand and with graphical methods!