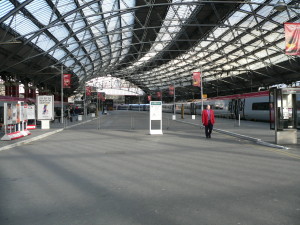 The existing roof, with two vaults at 200ft (60m) span, was for its day an advanced structure fabricated in wrought iron. Engineering contractors and engineers in the United Kingdom led the world in design and construction of railways. A series of arched trusses in 32ft(10m) bays shelter the station in two swept curves.

An interesting question was posed by Jim Parry during the talk. Is this roof structure an arch or trussed beam? A very simplistic way of differentiating a beam from arch is to review the diagram to the right. 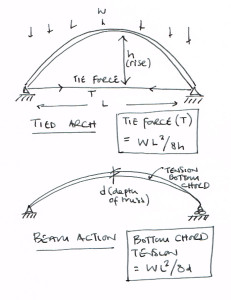 ections, the tie force for the tied arch and curved beam (with released horizontal right hand support) bottom chord are related to the total bending moment for comparable loading and spans.

For the tied arch, the tie force is the ratio of bending moment/rise(h).

For the trussed beam the bottom chord tie force is the ratio of bending moment/truss depth(d).

In simplistic terms if the rise is 4 times the truss depth, the tie force in the arch is a quarter (or 25%) of the bottom chord tension.

If the Lime Street roof is analysed with some restraint to the support then perhaps this can be settled. 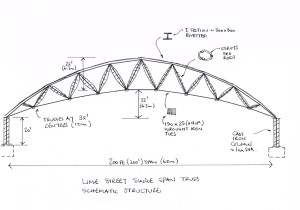 The section above shows a single truss. Not all of the sections are known but in approximate terms this is not an issue. Truss geometry and dimensions were extracted from a timeline on the web. 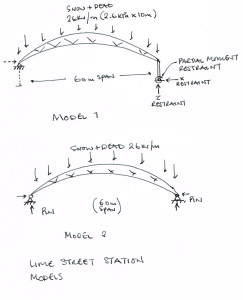 Two models were checked on GSA software. The first was partially restrained by the cast iron post with a partial moment restraint at the base, adjusted by trial and error. The second was pinned at each end; analagous to a pure arch.

Dead and live loading were assumed to be 2.0 and 0.6 kpa respectively.

In the first instance purely beam action with the loading and span shown for a depth of 6.7m yields 1746kN tension in the bottom tie of the truss. A pure arch (pinned each end) action yields 866kN to 1170kN depending on selection of rise, h (10m for centre of truss and 13.5m for top).

In other words the realistic model (model 1) should indicate how close it is to a trussed beam or arch.

As an aside, selection of the moment spring value was by trial and error. The horizontal thrust at the base of the cast iron columns was compared 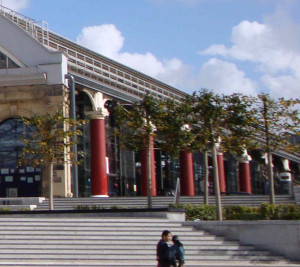 with the vertical reaction. Like the medieval cathedral section in the book (see figure 2.8.17 on page 91), looking at the action from flying buttresses, the rotational spring stiffness was increased until the resultant reached the middle third of the column base (at 1m width approx.) so that there is no significant overturning on the column base. This was thought to be a reasonable criterion. 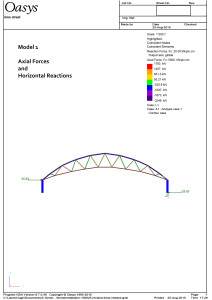 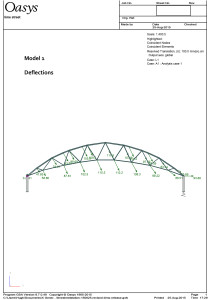 This partially restrained model gave overall deflections circa 100mm (90 horizontal at the support) and tension in the bottom chord of 1770kN (1750kN in top chord). 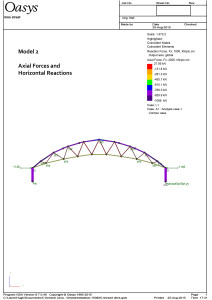 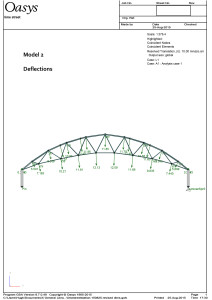 This model yielded 1088kN thrust in the top chord (ignoring the small compression in the ties) and much reduced deflections of circa 11mm.

This is where the mystery lies. The first model with partial restraints is believed to be much more likely, given the limited lateral resistance of the columns. In other words the trusses are posited to be more like beams than arches. However the deflection laterally at the top of the columns is 90mm, which at a ratio of height/67 is high.

More likely, perhaps, the columns have moved out no more than 30-40mm under thrust (maybe shared each side of the truss) and therefore it still acts as a beam. At span/600 for the coinciding deflection, this is a reasonable level of expected deflection. But is this realistic if the trusses side by side are linked and thrusting against each other?

A vote for the beam action is the result, but others might think otherwise…blogs welcome!